He describes his live improvisations as "sub-conscious flow", studio music as "electro-melodic sound-painting" and his life as "chance careering". Tony Palmer [The Observer]: "behind this manic subterfuge there lurks a powerful musical intelligence". Robin Denselow [The Guardian]: "an accomplished composer and musician, an experimenter on the free form edge, poet, and a comedian with a taste for the absurd".

He joined The Original Downtown Syncopators jazzband in 1961, stayed with them for 4 years and then commenced his solo career. This split mainly into two separate routes: pure expression, emerging in live performances and recordings, and; media composition - music for films, TV and radio. Adding to his dexterity on fretted strings and keyboards, he embraced the tape-recorder early on and largely dispensed with other musicians, electing to make what he could with this comparatively new tool, actually five in a row at the point when a necessary switch to computers was practicable.

He co-wrote Pink Floyd's Atom Heart Mother [EMI CD] and made Music From The Body [EMI CD] with Roger Waters. After his first solo vinyl album A Raise Of Eyebrows [Transatlantic 1967], he became one of the first one-man record companies with As He Stands, Patruns and Right Through. His first book of poems and stories Fallables appeared in 1974. CDs include HEADSCOPE's Funny Frown (1991), Bluefuse (1993) and Right Through - And Beyond (2003), CHERRY RED's Hystery (1994) and CLEOPATRA's (LA) Land Of Mist (1995). SEE FOR MILES reissued his first 2 albums (A Raise Of Eyebrows and As He Stands) on one CD in 1995. HUX RECORDS issued Biting The Hand (2008), a double CD of all his early BBC radio broadcasts. TONEFLOAT has released his epic RonCycle1: the journey of a melody in CD and LP formats, March 2011.

For Expo 70 (Osaka Japan), he made a large multi-source sound-work in the British Pavilion. His Tune Tube, a giant interactive walk-through tube in sound and light 'played' from the inside by individuals' body-movements, was a huge success at The Art Machine exhibition for 'Glasgow 1990' ("it takes the prize": The Times). He and his wife Frances designed and installed Tri-Aura (interactive textile triptych) at The Science Museum in 1996 followed by PalmAura in 2000 and he designed the quadraphonic Singing Bridge for its new Challenge of Materials Gallery in 1997. In 1998 he created 2 public interactive events in Portsmouth: Sound-A-Maze for Shock Waves Festival and Sea Sound, the University of Portsmouth's exhibit for the International Festival of the Sea. He was a founder member of the University of Portsmouth team to win a 1.5M Euro grant for ‘Mediate’, an interactive environment to engage autistic persons in non-verbal communication.

Ron's improvised one-man show, alternately hilarious and disturbing, has been performed from folk clubs to the Albert Hall, from Scotland to Scandinavia since 1965 and features banjos, guitars, piano, poems and stories, milkchurns, electronics, coat-stands and, most importantly, the audiences themselves.

His radio broadcasting strand began by being featured on John Peel and Bob Harris shows for BBC R1. Geesin's 1993 impression of the River Trent Splashpast was broadcast on BBC R4, and the 3/4hr 'fantasy for Purcell' Mask on BBC R3 in 1995 (a Sony award nomination). In 1993 he researched, wrote and presented his 6-part series on saxophonist Coleman Hawkins Hawk Stalks on BBC R3, following this in January 1995 with his 4-part analysis of the much underrated American pianist/composer, James P. Johnson.

His collaborations with artist/writer Ian Breakwell include the quadraphonic Bellring (1996), their acclaimed 1993 large-screen video installation Auditorium and Breakwell's autobiographical TV series Public Face Private Eye [C4TV]. As a spirited and informed lecturer, he has excited students since 1969 from primary schools to universities, examining the combining of music and sound with subjects as diverse as typography, the street and the media. In 1987 he was composer-in-residence at the Royal Greenwich Observatory, Herstmonceux. He was appointed Senior Research Fellow in Sound at the University of Portsmouth in 1996 and resigned in 2003.

In June 2008, Atom Heart Mother was the climax of his 2 concerts to open the Chelsea Festival at the Cadogan Hall, with David Gilmour (Pink Floyd) as guest on the second night. 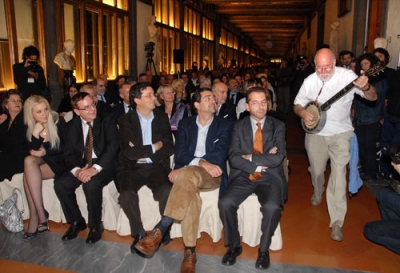 In October 2008, he performed a solo show in the Uffizi Gallery, Florence, Italy, supported by cellist Caroline Dale.

Further Continental interest in Atom Heart Mother was shown in the French Education System's choosing it to be studied in the Baccalauréat 2012-2013. His personal history of this contorted collaboration with Pink Floyd is published by The History Press as The Flaming Cow in July 2013.

Entirely unconnected with all of the above, and probably as a therapeutic relief from it, he wrote The Adjustable Spanner -   history, origins and development to 1970 - based on his collection of some 3000 British specimens and published by The Crowood Press, 2016.

The one-hour documentary An Improvised Life was made by Callisto Productions in 2015 and has been shown on Sky Arts  several times since 2018. He made his last ever live performance in February 2020 at the Cardiff Arts Centre.